Disaronno, the most consumed Italian liqueur in the world, becomes the star of Milano Design Week 2016 and presents the limited edition jar, produced in collaboration with renowned designers Studio Job. Only 5000 jars have been made, making it a truly unmissable item.

The original and irreverent touch of Job Smeets and Nynke Tynagel, considered to be among the leading exponents in the international design scene, transforms the jar into a collector’s item, drawing inspiration from the unique taste of the brand’s flagship cocktail, the Disaronno Sour

The drink’s mix between “sweet and sour” – made with Disaronno and lemon juice – gives rise to a web of iconographic symbols in contrast to one another: from the rose to the gun, from the heart to the skull, all in perfect “Studio Job” style. The Disaronno jar, which reintroduces common practice during the 1920s Prohibition in America, when cocktail 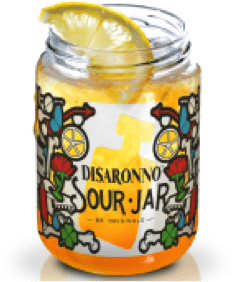 s were served in glass jars in order to camouflage their contents, will be officially presented on Wednesday 13th of April during Milan Design Week.

Disaronno will in fact have its own float taking part in the first ever Design Pride, an exciting pop parade which is a real carnival of design and will be attended by other brands such as Seletti, Gufram, Pepsi, Radio DeeJay and Toiletpaper. From 7:30pm, the procession will make its way through 5VIE and eventually conclude at Piazza Affari with a celebratory party open to the public, organized by Disaronno for the launch of the jar.

“Disaronno takes part in Milan Design Week for the third consecutive year, but this year it is so much more meaningful, thanks to the collaboration with the non plus ultra of international design,” said Paolo Dalla Mora, Global Communication Director of Disaronno. “Working with Studio Job was exciting: our Disaronno Sour cocktail will be served in a real gem of design, a combination of tradition and innovation, which is consistent with our philosophy. A gift for us that we hope will in turn become a gift to the people of Design Week.”